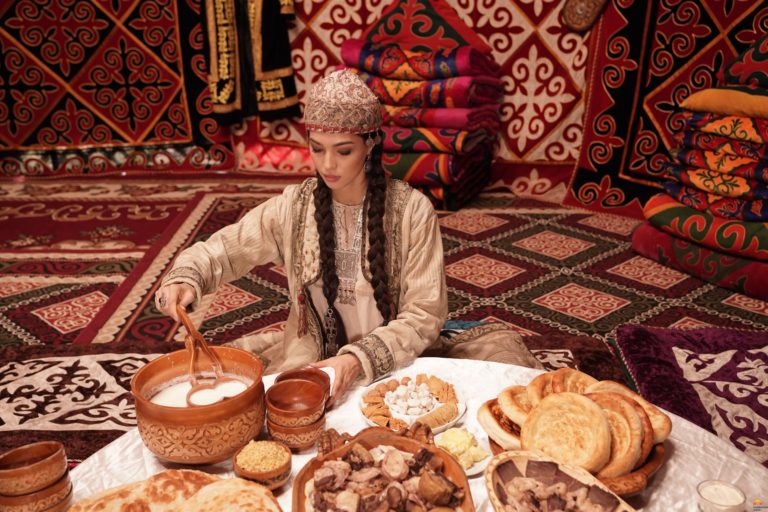 Today I would like to invite you into the colorful & rich world of the Great Steppe’ nomads. If we would be lucky and could move into the past we would see magical world of people who lived in a peaceful cooperation with nature. If you would be able to enter their home you would see that literally all of their furniture, carpets, rugs, clothes and even shoes were decorated with beautiful colorful ornaments. Every yurt was like a private art museum. Why did they do this? What would be the point of spending a giant amount of time and money to have such a decorated house? Cause a lot of the times the items were made by artisans for good payment. Was it only a decoration?

We should remember that nomads were absolute minimalists by their nature. There is nothing extra in nomadic life, everything is thought out and done in advance. For example, all household items of an ordinary nomad should never exceed 350-400 kg. The bulk of the cargo is a felt yurt. If the main load exceeds 500 kg, then the camel will be tired too soon, even worse, he may die from fatigue and overload on a long road, with an average duration of 500 or 1000 km.

So that’s why every item the nomad owned was highly multi-purpose: functional, beautiful & protecting him and his family from the spirits.

Kazakh ornaments are mostly the pictograms that have extremely deep meaning and each of that pictogram represent the Tengrism religion and philosophy. All of them are made not only for decoration but as a talisman. Some symbols are for the wealth and prosperity, others are for the safe road and safe way back.

So let’s see some basic groups of the Kazakh ornaments. 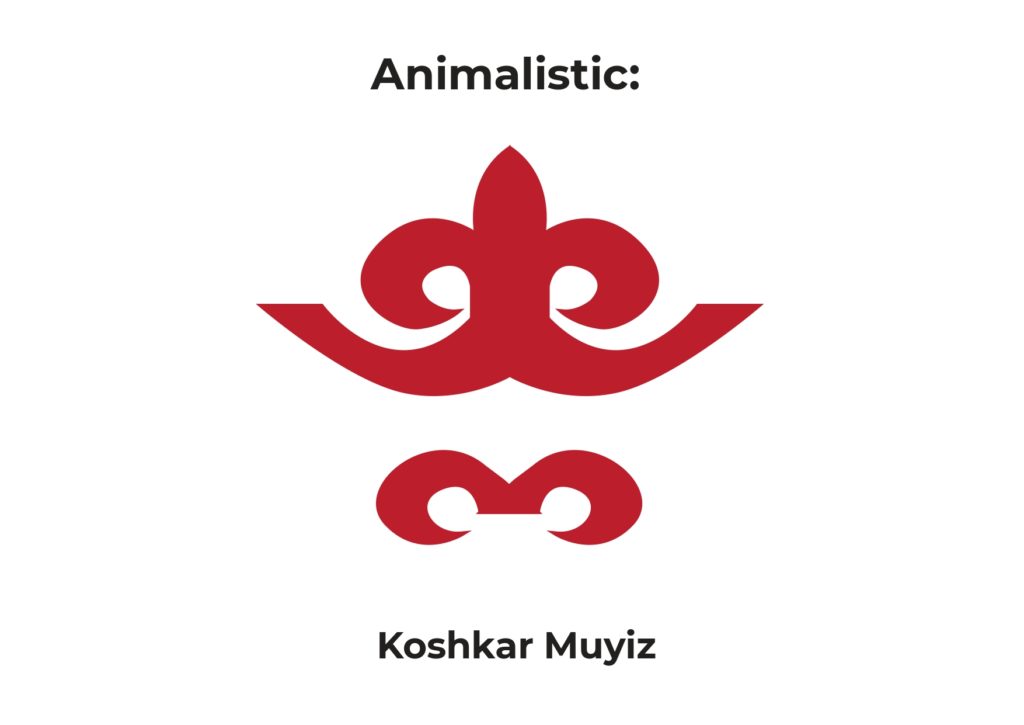 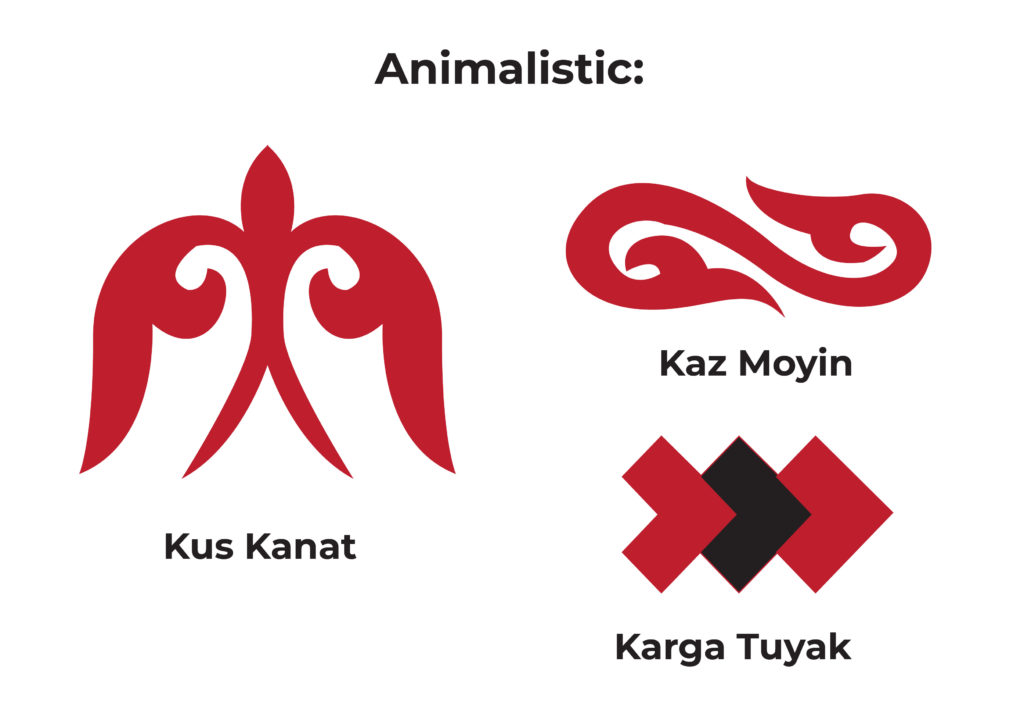 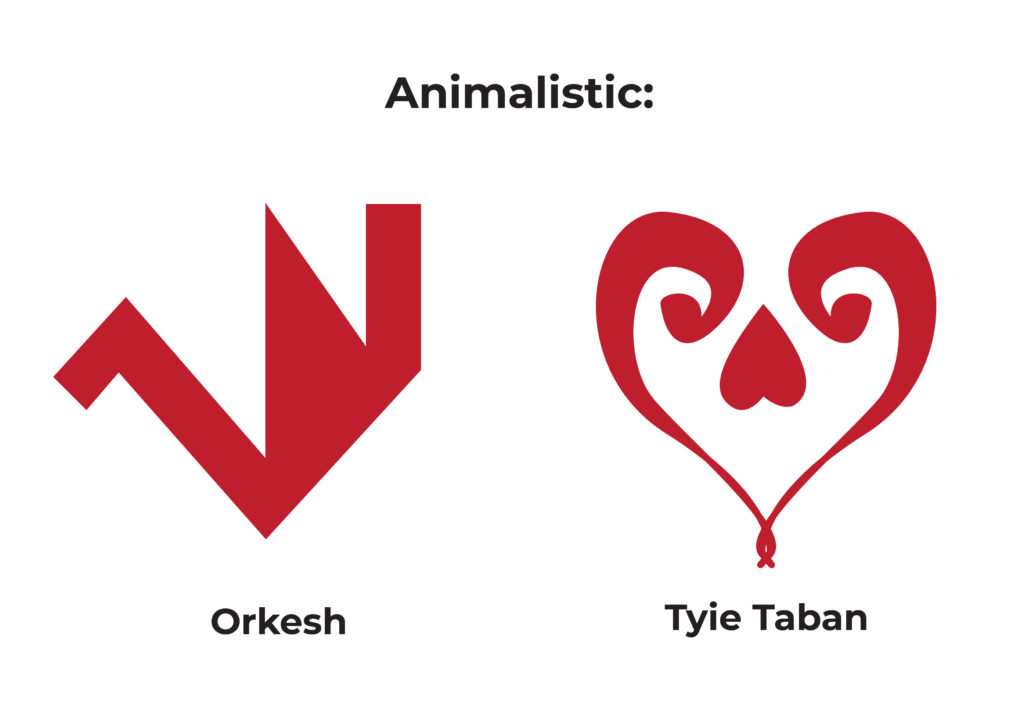 These symbols are the result of contemplating the behavior of totem animals. Horses, camels, falcons and rams came to life in patterns. Subsequently, individual parts of the animal body were reproduced: wings, heads, horns, humps. In each ornament, you can guess a certain semantic reference.

The horn-like ornament, widely spread in folk life, is considered to be the founder of ornamental art. It’s most common element is koshkar muyyz – ram’s horns symbolizing vitality, grace and prosperity.

In Scythian and Turkic mythology, horned animals – argali and ram, along with a horse, were associated with a heavenly miracle that personified the upper section of the universe. Thus, animal horns could personify the divine higher principle. In animals, the presence of horns of arcuate and spiral shapes was perceived as yet another confirmation of their divine mark.

The horns in culture of various nations (Egyptians, Germans, Sumerians) often had a sign of power. Helmets with horns were worn by kings, and when Alexander the Great came to Asia in a horned helmet, many thought that he is a god.

By the way, note that Zeus had lamb horns. And if you recall why the Argonauts sailed to Colchis – to get the golden fleece, lamb skin. So the rams were revered not only by nomads.

Next are its derivatives and modifications: kos muiz – paired horns, synar muiz – one horn. Or, such motifs as karga tuyak – crow’s paw, asha tuyak – cloven hoof, kusmuryn – bird’s beak, kuskanat – bird’s wing, go to the depths of Saka time, based on numerous plots of bright art of “animal style”.

Zoomorphic ornaments also include wolf ears “bori kulak”, common for jewelry and skin embossing, the head of the horse “tulpar bass” in the form of a cross with horse heads in the corners, the fox’s head – “tylki bass” pattern in the form of a rosette, common for of tuskiiz . One of the zoomorphic patterns (also known as cosmogonic), four ears, “tort kulak”, is common in Kazakh ornaments. This is a cross-shaped figure, composed of intersecting lines with four ram horns located in the corners. A system of patterns for the central field of carpets is built from it.

So from one spiral-shaped element of the muse curl a whole cosmos of ornaments arose in its most varied variations – isn’t is just fantastic! 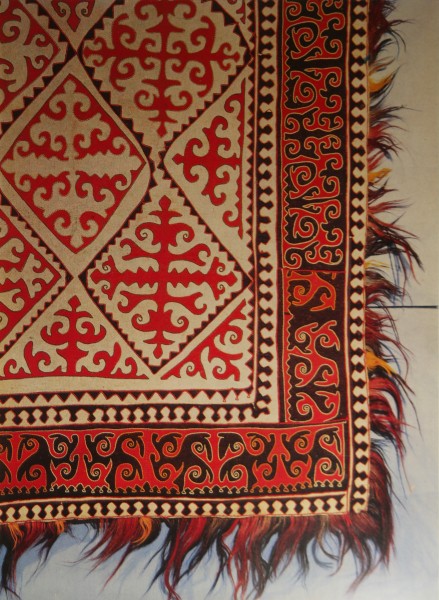 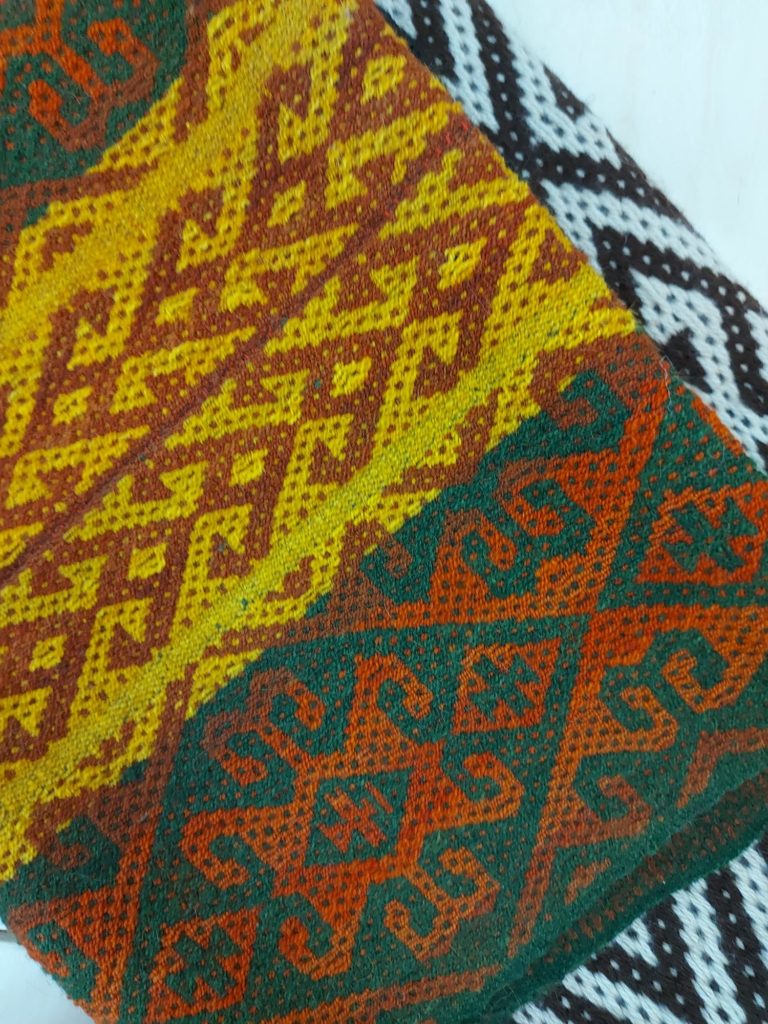 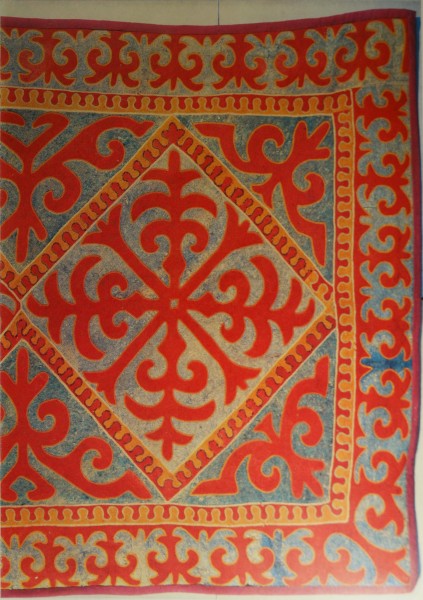 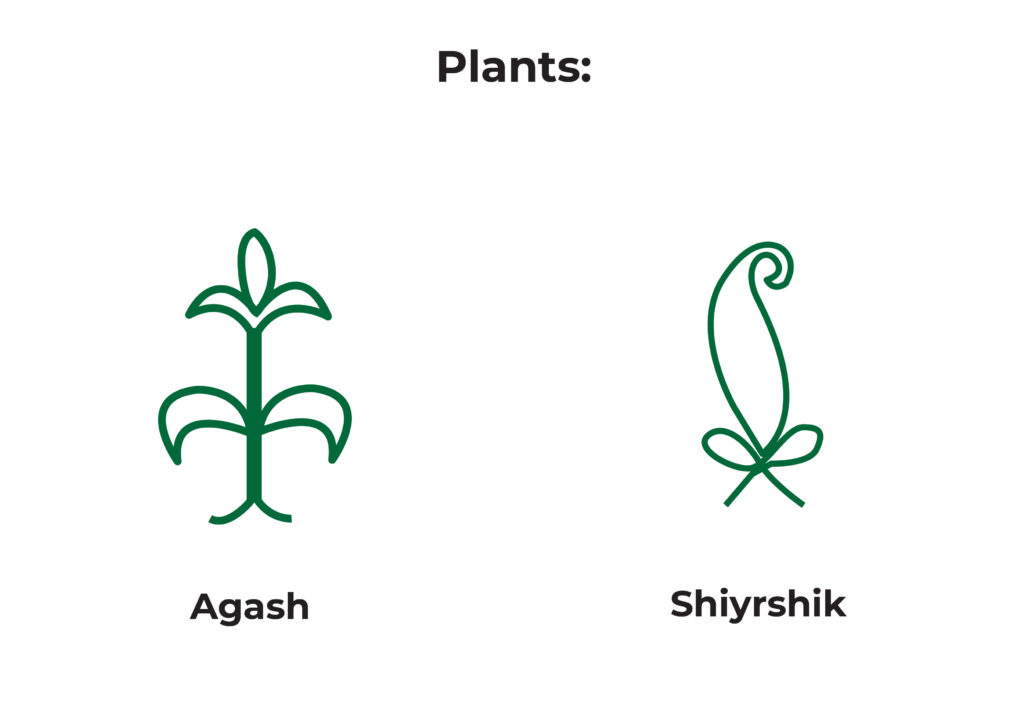 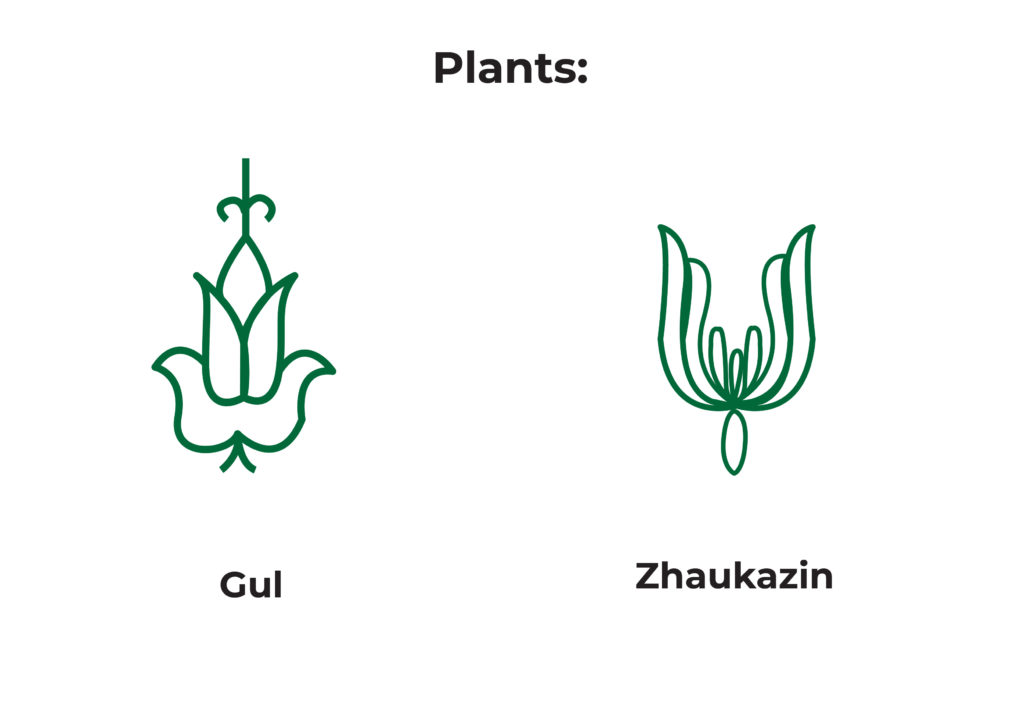 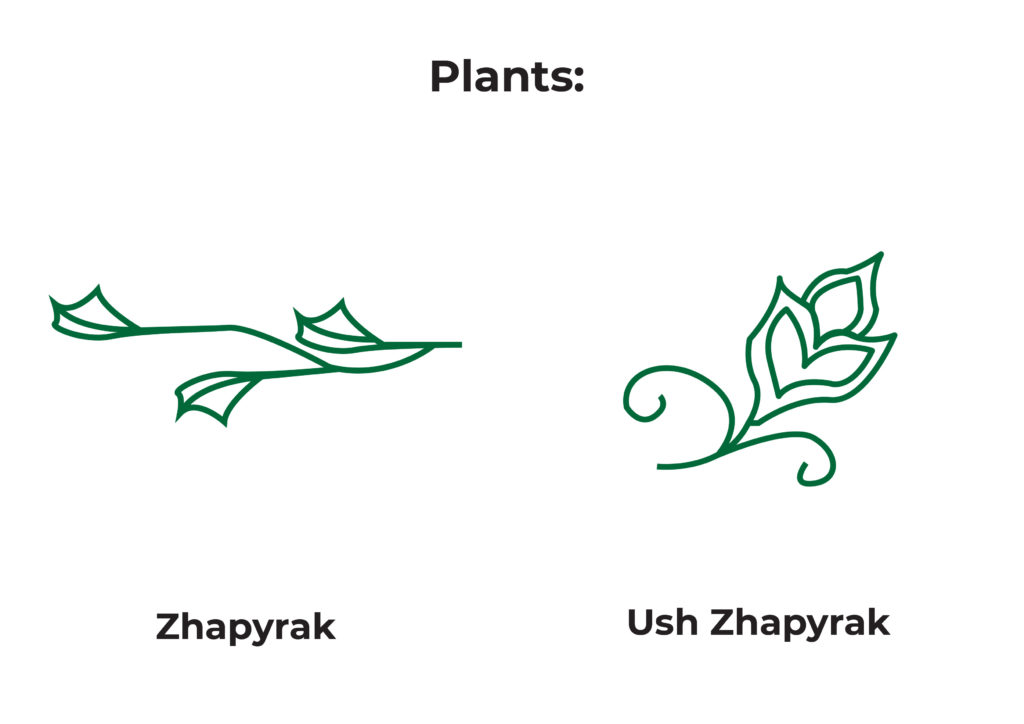 Plants served as food and medicine, helped to raise livestock. No wonder vegetation received such attention in the ancient world. Flowers, leaves, inflorescences and fruits served as the basis for creating ornaments of extraordinary beauty.

Flowers and their interweaving reveal the concepts of unity, development and interconnection in the Kazakh ornament. The ideas of fertility, the personification of the eternal renewal and revival of life, abundance were associated with floral motifs. They are most often used in embroidery designs on tuskiiz, in clothes and on household items. 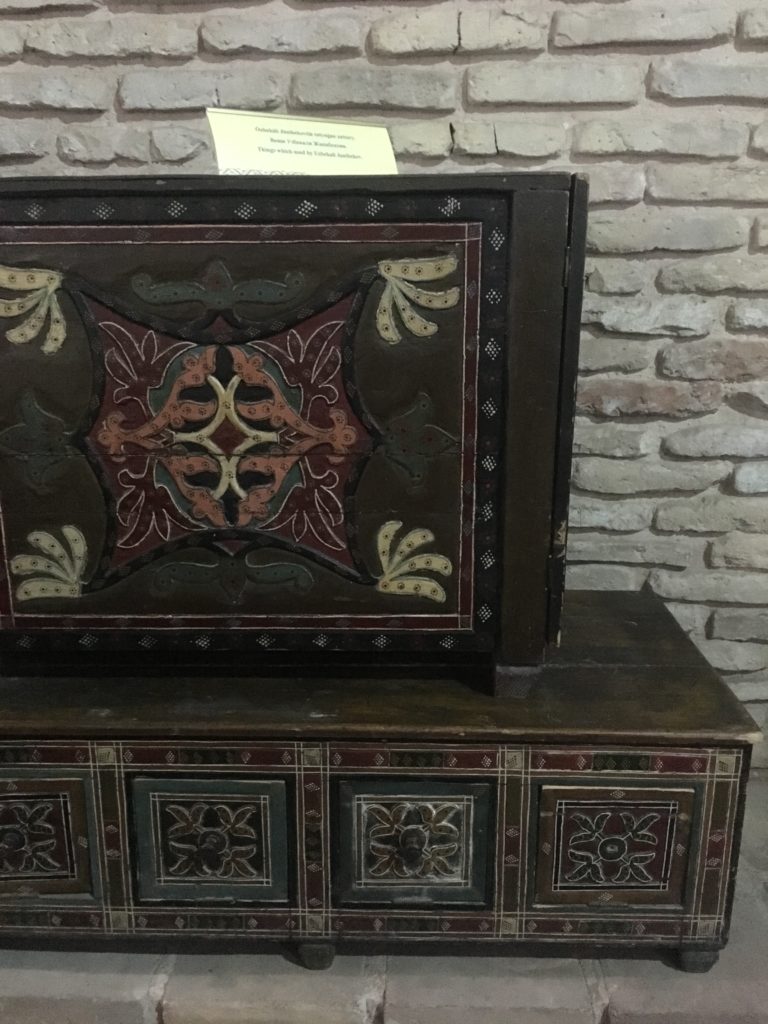 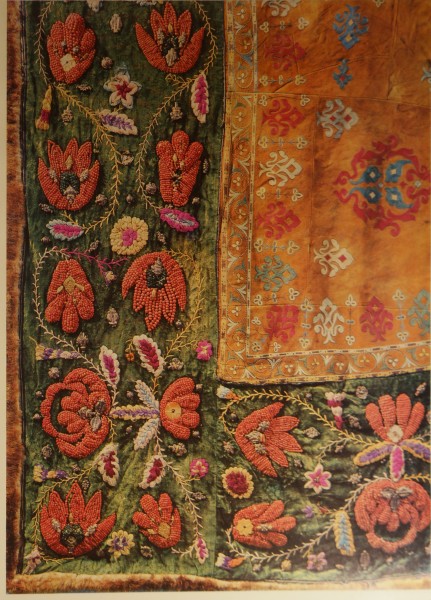 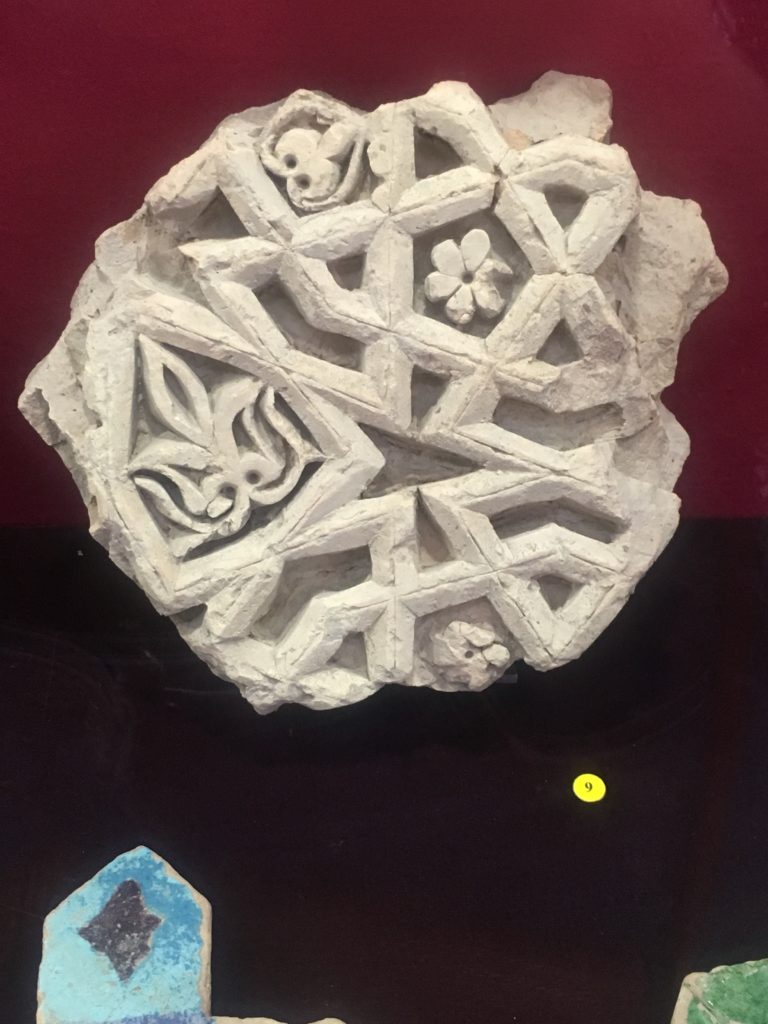 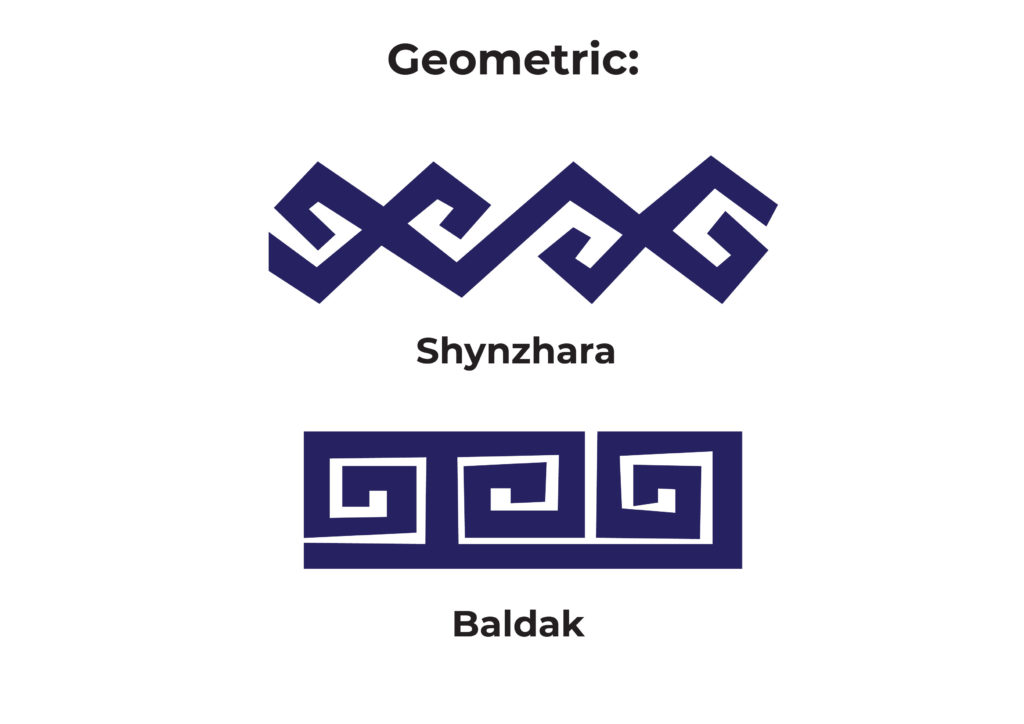 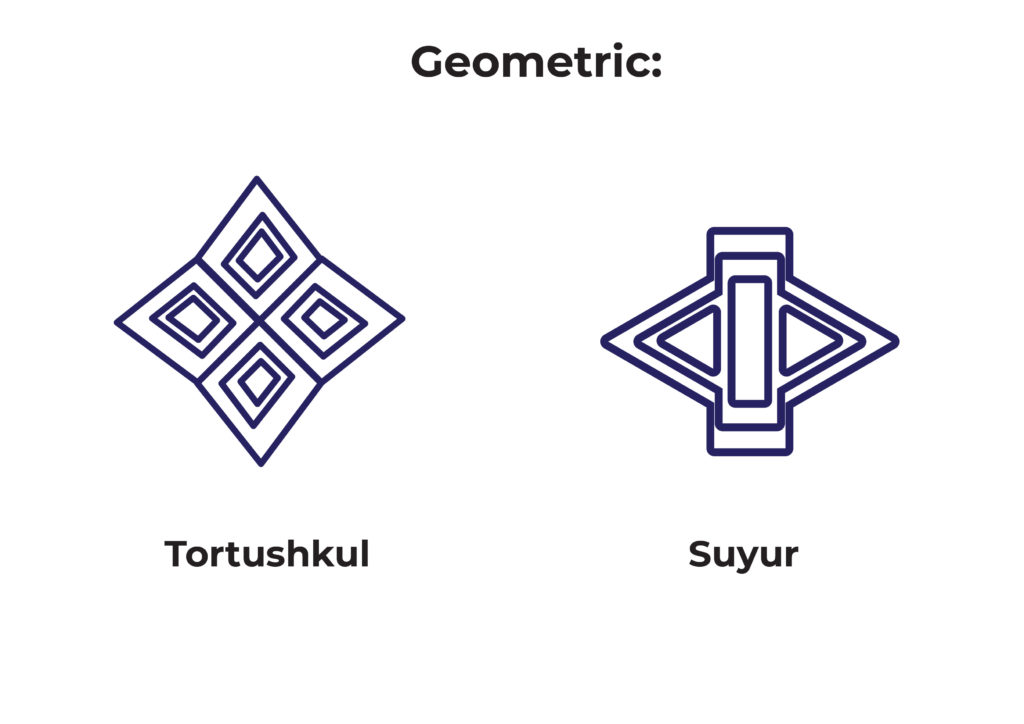 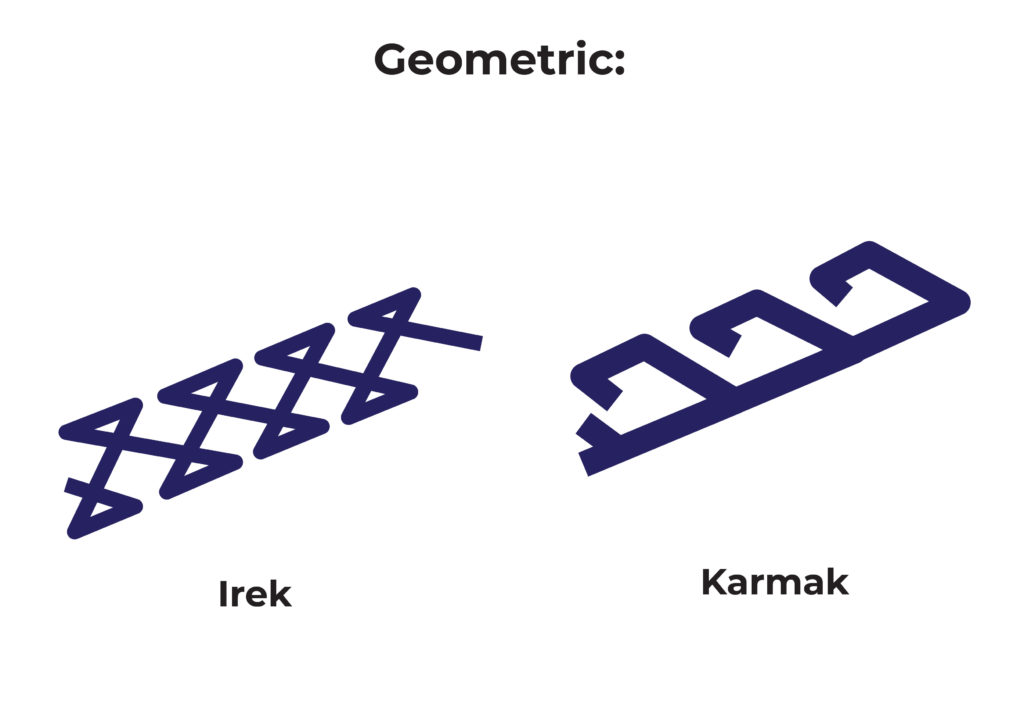 The geometric types of Kazakh ornaments, such as rhombuses, zigzags, triangles, are leading in woven products

This type of ornaments is associated with the technology of creating these products. Geometric patterns are characterized by a balance between the individual elements, a proportional division of the figures inscribed in the composition. All kinds of lines are diverse: straight, wavy, spiral-shaped, in the form of a chain, cord, with the help of which their derivative ornamental compositions are created. They are widely used in architectural decoration, carpet products, wood and stone carving, and leather embossing. Thus, the material and technology of the product affect the style and pattern of the ornament.

Rhombuses here are combined not only with crosses, but also with a swastika. For modern people, this is the emblem of the Nazis, but, considering themselves Aryans, they took it from the Indians, whose ancestors were ancient Aryans. This element arose in the Neolithic era, the swastika was common in Asia and the Caucasus, in Greece, even in America, it is found among objects of the Mayan state. They say the Milky Way resembles a swastika. It includes the idea of ​​the four cardinal points and reflects the rotational movement of the world around the world axis.

One of the most famous historical building in Kazakhstan, the Mausoleum of Khodja Akhmet Yassawi, has swastika elements in its wall decorations. 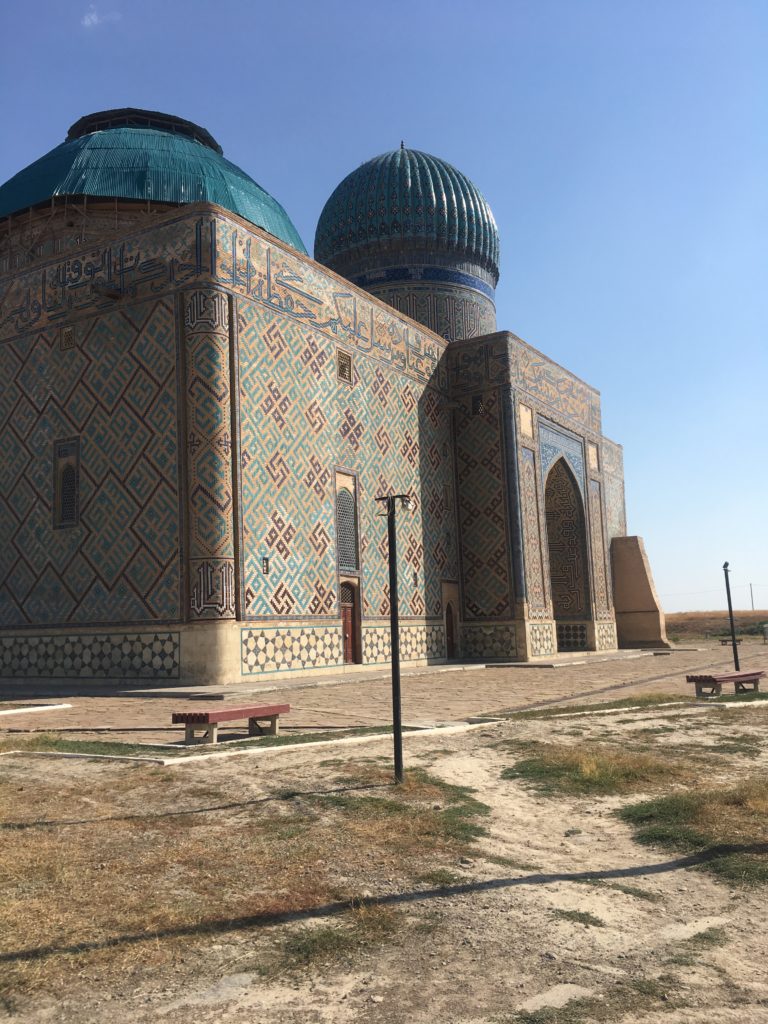 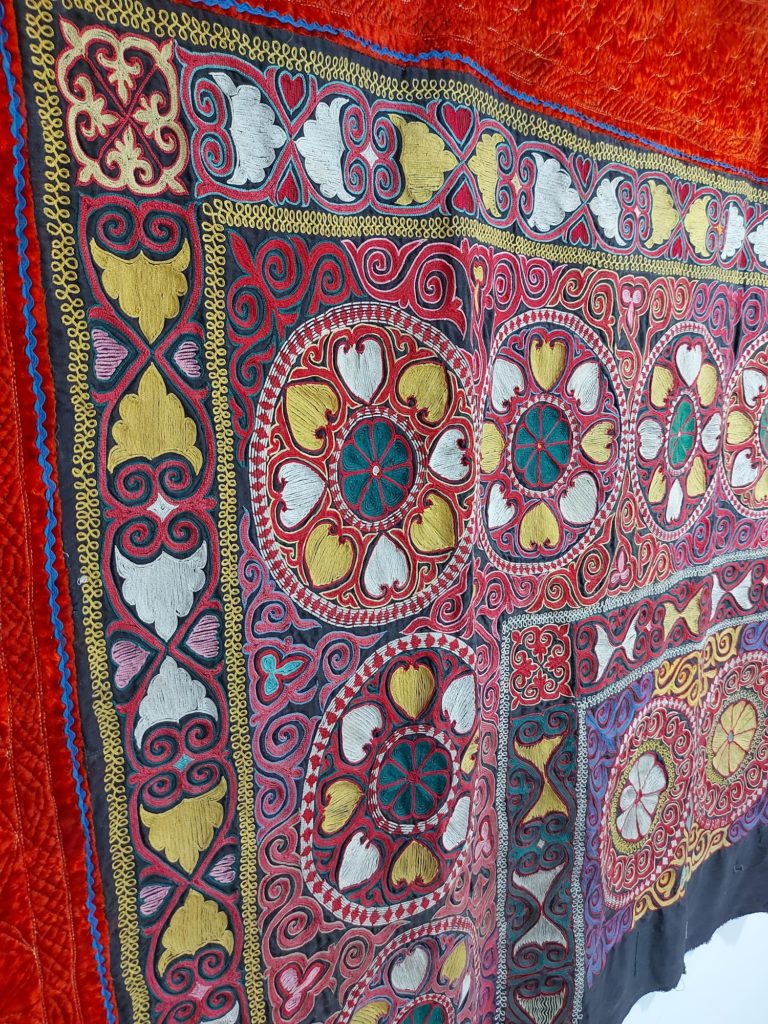 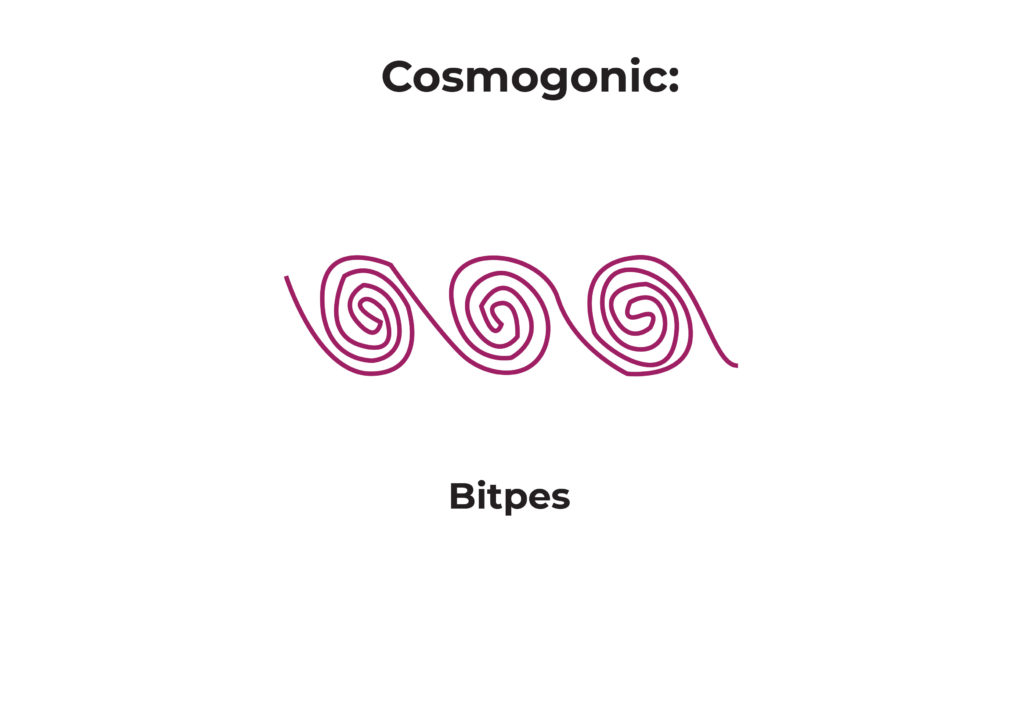 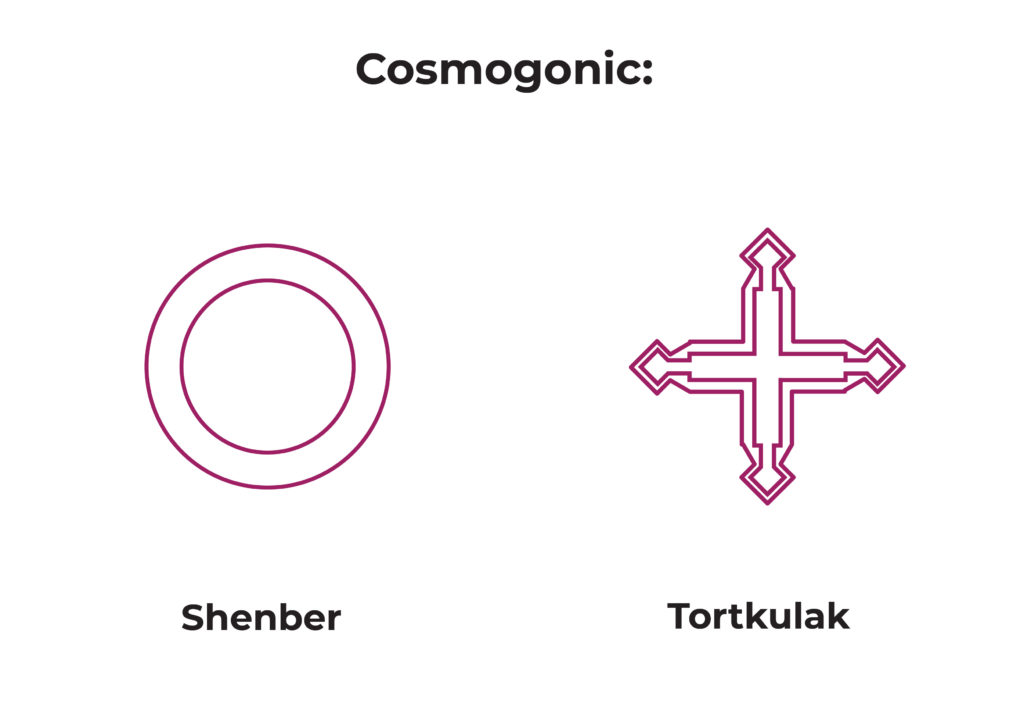 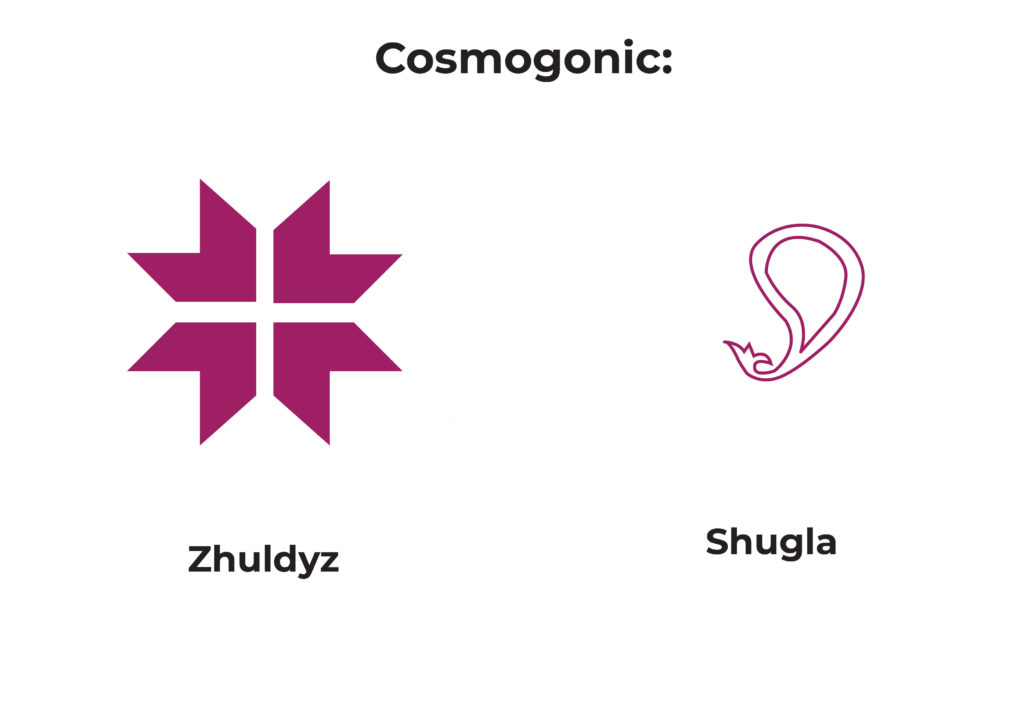 Cosmogonic motifs of Kazakhs are universal for many peoples of the world. These include:

Kazakhs believe that every soul has a star, so when the star is falling it means someone died. When someone sees the falling star they say: my star is higher.

The ancient peoples did not know that the stars are distant suns, but they believed that these small dots affect their lives. According to Turkic legends, when Tengri saw that the vault of heaven had collapsed and crushed the earth, he supported it with his iron staff. At the point where the Tengri put his staff in the sky, there is a star Temir kazyk – this is the name of the Polar Star, a fixed point in the sky, according to which travelers are oriented, it is a space stem, that defines order of Universe. They also believed that unborn souls live on Venus. This planet, Sholpan, was important for nomads also because the shepherds were oriented in time: the star came up – you can drive the herds home, therefore it was called the “shepherd’s star”.

Traditionally, the best ancient astronomers are considered marine peoples, whom swimming in the open sea made them study the night sky to navigate the stars. Coastal coasting has already given the ancient Phoenician seafarers such knowledge that formed the basis of European astronomy. But migrations made by nomads required no less knowledge than sea voyages.

Their travels in duration (in space and time) were many times superior to the sea routes of contemporaries. Passing thousands and thousands of kilometers a year over an ocean of grass in the steppes of Eurasia, they crossed several landscape and climatic zones, when everything changed around – seasons, landscapes, flora and fauna, color of air and taste of water. On the way, children were born and grew up, young men were becoming husbands, old people were passing away… And in this moving world, the only lasting signs by which to check the path were stars; in a world changing around a nomad, only the sky above his head was unchanged – the divine Kok Mengi Tanir – the Blue Eternal Sky

Each nomad family had its own yurt, the dome of which remained open for a certain part of the year, and the poles of the dome were a good reference point for observing at night the movement of the moon, stars and planets. Thus, each yurt was a kind of family“ planetarium ”, thanks to what accumulated and transmitted from generation to generation observations of the luminaries.

Without deep astronomical knowledge, it was impossible to master the very type of economy based on constant movement.

Astronomy was especially necessary for migrations at night, which were made due to heat, waterlessness or for other reasons. “Knowing the position and course of most of the luminaries of the heavens, the Kyrgyz (Kazakh – A.M.) boldly sets out at night along the steppes in which there are no roads, no paths and not only accurately reaches the desired goal, but even determines the hour at every step or the time elapsed from the beginning of the night, and the place where his morning finds. In the same way, looking at the sun, he assigns how long it appeared on the horizon and when it will disappear. According to these remarks, he has his classes, rest, travel, stops, trips, dates. In a word, he looks at the sky, like a European at a pocket watch. ”